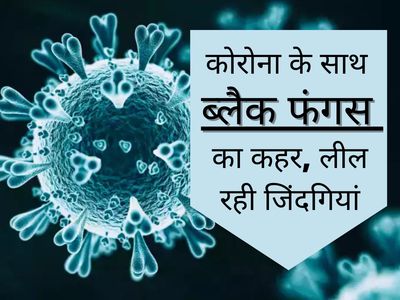 Just when coronavirus cases in India have only begun to plateau at a grim 4-lakh mark, a new symptom of the deadly disease has emerged causing distress among the population.

Mucormycosis, better known as Black Fungus infection, has been reported in many COVID-19 survivors, mainly from Delhi, Maharashtra and Gujarat.

While the symptoms have already raised eyebrows and added to the panic basket, it does not affect everyone. So who should worry about it?

What is Black Fungus?

Mucormycosis or Black Fungus is a serious but rare fungal infection due to a rare killer fungus called Mucor which exists in the environment, often found on wet surfaces.

It is seen in the form of blackish moulds.

People get mucormycosis by coming in contact with the fungal spores in the environment. The fungus causes the disease that has now been linked to the airborne COVID-19 infection.

The infection first came to light during the first ‘wave’ of the pandemic. It was previously known as zygomycosis.

Who should watch out for Black Fungus?

Black Fungus generally affects COVID-19 recovered patients who have other comorbidities like diabetes, kidney or heart failure, cancer as well as patients who are on steroids or have had a transplant.

However, it is most common in diabetic patients, said the Centers for Disease Control and Prevention (CDC) of the United States.

Prior to the COVID era, Black Fungus was extremely rare and found only in immunocompromised people.

However, coronavirus itself reduces immunity levels, largely affects diabetic people and is treated with steroids if serious.

As a result, COVID survivors are vulnerable to the infection, especially in the severe second wave.

Early detection will aid the patient’s medication for the fungal infection and clinical intervention to the affected area.

Must read – What is video KYC ? Everything that a bank account holder must know?

Usually, MRI scans determine the extent of damage the fungus may have caused. Mucormycosis, if left undiagnosed or untreated, may result in blindness, removal of the nose, jaw-bone or even death.

Black lesions on nasal bridge or upper inside of the mouth

Pain under the eyes

The fungal infection raises alarm with a mortality rate of more than 50 per cent if diagnosed late.

At least eight people out of 200 such COVID-19 survivors have died due to mucormycosis during treatment in Maharashtra.

Meanwhile, the infection has also been reported in large numbers in Delhi and Gujarat.

Mathur Savani, chairman of Surat-based Kiran Super Multi-speciality Hospital told PTI that 50 mucormycosis patients are being treated and 60 more are awaiting treatment at the facility. Seven such patients lost their eyesight, he added.

During a Health Ministry briefing, Niti Aayog Member (Health) V K Paul said that mucormycosis cases were being found in patients with COVID-19.

“It, to a large extent, is happening to people who have diabetes. It is very uncommon in those who are not diabetic. There is no big outbreak and we are monitoring it,” he had said.

“When a patient is on oxygen support, it should be ensured that water does not leak from the humidifier (to prevent the growth of the fungus),” he said, while also calling for “a rational usage” of steroids and medicines such as Tocilizumab to treat COVID-19 patients.