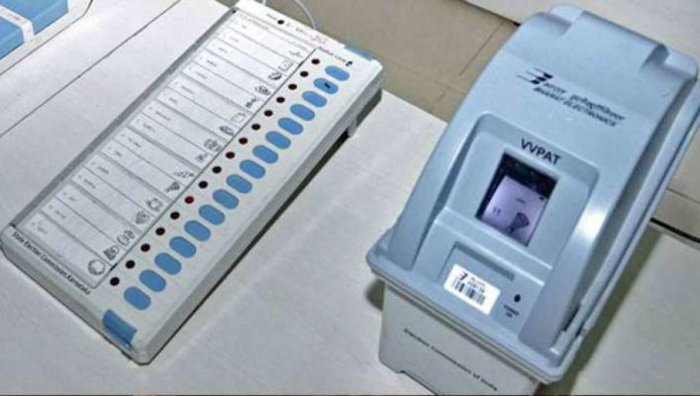 EVMs were used on an experimental basis for the first time in elections to 16 Assembly constituencies in Madhya Pradesh (5), Rajasthan (5) and Delhi (6) held in November, 1998.

The 2004 Lok Sabha election was conducted entirely on EVMs.

Controversy is brewing over an Indian cyber expert’s claim that EVMs (Electronic Voting Machines) were hacked in the 2014 Lok Sabha elections which the BJP had won by a landslide margin.

Reacting strongly to the allegations, the Election Commission rejected the claims and insisted that the EVM are fullproof.

A research paper published in July 2014 and titled ‘India’s Electronic Voting Machines (EVMs): Social construction of a “frugal” innovation’ authored by Maximilian Herstatt and Cornelius Herstat, noted, “EVMs in India are unique and quite different from EVMs employed in other nations like the US.

Rather than large, expensive, complex and computer like systems the Indian machine is praised for its simplicity, inexpensiveness, and efficiency.

The Election Commission of India is very proud of this system and stated that the machines are perfect and tamperproof.

It has been argued that the simplicity of EVM design has negative implications as well, when it comes to questions of transparency, verifiability and the overall security of the election practice.

Although the ECI generally claims that EVMs are tamperproof and perfect for the Indian elections, there have been occasions where EVMs malfunctioned and had to be replaced.”

When was the first EVM used in India?

It was first used in 1981 in the by-election to North Paravur Assembly Constituency of Kerala in 50 polling stations.

A new generation of EVMs was developed in 2011 with a feature for Voter Verified Paper Audit Trail (VVPAT).

Also read – What is bitcoin?

Can the EVM be pre-programmed to favour a party or candidate?

To transfer votes to a particular candidate, it is necessary for the EVM’s programme to identify the favoured candidate’s serial number.

Now, the order in which candidates appear on the ballot paper depends upon nominations filed and found valid and this cannot be predicted in advance before the list of contesting candidates is actually drawn up.

EVM and VVPAT in a nutshell

An EVM has a control unit and a balloting unit along with VVPAT joined by a cable.

VVPAT is an additional unit attached to the EVM, which prints a small slip of paper that carries the name, symbol and the serial number of the candidate, which is visible for seven seconds on the viewing window.

For a country like India which is the world’s largest democracy questions were raised when the EC decided to introduce the EVM system.

Demand to abandon the use of the electronic voting machine was raised by BJP after their electoral defeat in 2009.

The critics of EVM demanded the bringing back the ballot paper after the 2014 elections.

The next spate of demands came in 2017 when several TV channels ran source-based news that the EC was planning to hold a week or 10-day-long challenge where EVMs would be deployed at its headquarters in New Delhi and all doubters will be given an opportunity to hack the machines.

At conclusion, tempering of the EVM is not possible under normal circumstances.

So, allegations are false and are for the fulfillment of the interest of a particular political party.

Also read – When is 5G going to be launched in India?