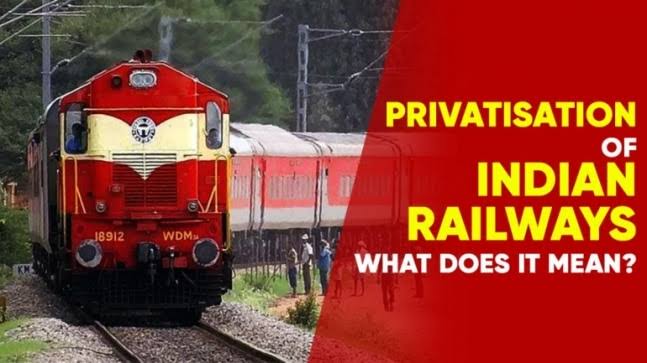 Along with Banks, airways and other sectors Privatisation of Railways by indian government is much anticipated act.

With the on going privatisation process in the entire nation, this also covers one of the most important sectors of India,The Indian Railways.

To upgrade the country’s railway system ,the NDA government has laid the roadmap for long term partnerships with the private sector.

What is the need of privatisation of railways ?

The strong argument in the favour of privatisation is that it will lead to better infrastructure which in turn lead to improve safety ,reduction in travel time etc.

Privatisation will solve the problems like lack of punctuality , mismanagement of platforms and lack of water and other essential needs .

What are the disadvantages of privatisation of railways?

In privatisation,the routes which are less popular may be ignored due to the less pessangers there

This may have a negative impact on connectivity as the rugged terrain and low population density regions are ignored.

The private interprises runs on profit.

So,it is sure that travelling in railways is going to be much expensive.

What’s the opinion of government on this?

Recently ,the union minister Piyush Goyal said that the national transporter is never going to privatise and always remain of government.

However, Goyal stressed on the need of private investment for more efficient functioning of the railways.

He further said that whether it is economy, convenience of pessangers or any other area ,the government is listening to the demands of everyone with sensitivity and understanding their requirements.

What are the thoughts of government on privatisation of railways?

When it comes in terms of private investment, it should be welcomed.

Goyal said that country can progress towards high growth and create more employment opportunities only when the public and private sectors work together.

Must Read – Privatisation of Banks by Indian Government .