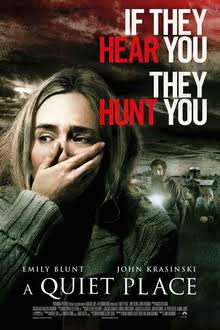 Much awaited Horror Thriller Quiet Place part 2 sequel of Quite Place released in 2018 is all set to Hit the Silver Screen. John Krasinski directed sequel will theatrical release on 28 May, 2021 across the globe.

Audience who are eagerly waiting for the Big Screen film debut will witness the real thrill. Fandango Managing Editor Erik Davis has said that Audiences who have long been waiting for the big-screen debut of A Quiet Place Part II will not be disappointed.

A Quiet Place Part II is a 2020 American horror film and the sequel to the 2018 film A Quiet Place, both of which follow a family that is forced to navigate and survive in a post-apocalyptic world inhabited by blind monsters with an acute sense of hearing.

The sequel was written and directed by John Krasinski under the studio Paramount Pictures. Paramount Pictures began development of a sequel in April 2018 following the box-office success of the first film.
Reviews out of the gate are high with a 92% Tomatometer score on Rotten Tomatoes

Following the deadly events at home, the Abbott family must now face the terrors of the outside world as they continue their fight for survival in silence.

Forced to venture into the unknown, they quickly realize that the creatures that hunt by sound are not the only threats that lurk beyond the sand path

Djimon Hounsou as Man On Island

Movie was all set to fire up the box office in March 2020, but due to the pandemic theatre release of Film was postponed. After facing a series of Postponements , finally Paramount pictures have decided to commence it from May 28, 2021 in New York city with Limited audiences .

The studio will then release the film on Paramount+ 45 days after its theatrical release.

Fandango reports that A Quiet Place Part II is currently selling twice as many advance tickets on its site and app as it did at the same point in its 2020 sales cycle, before the pic was pulled from the release schedule due to theater closures .