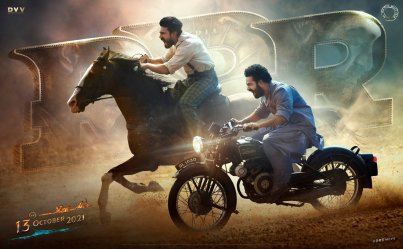 From Bahubali to KGF ,south indian filmmakers produced tremendous action thriller films.
Here is another great movie soon to be released in your nearest movie theatres .

What is the central theme of the movie?

RRR is a period drama set in India during the 1920s based on the  inspiring journey of two of India`s freedom fighters – Alluri Sitarama Raju and Komaram Bheem.

The film will release in Telugu along with the dubbed versions in Hindi, Tamil, Kannada, Malayalam and other Indian languages.

The filmmakers decided to release this movie in previous year .

However, the shooting was not completed on time because of the COVID 19 pandemic.

The trailer of the movie create buzz as soon as it is posted the social media.The trailer fetches more than 50 million views.

Surely,this movie going to be a blockbuster as fans are liking the chemistry of NTR and Ramcharan.

In October 2017, S. S. Rajamouli announced that his next film after Baahubali 2: The Conclusion (2017), would be produced by D. V. V. Danayya under DVV Entertainments banner.

In March 2018, Rajamouli confirmed that the film would be starring both N. T. Rama Rao Jr. and Ram Charan.