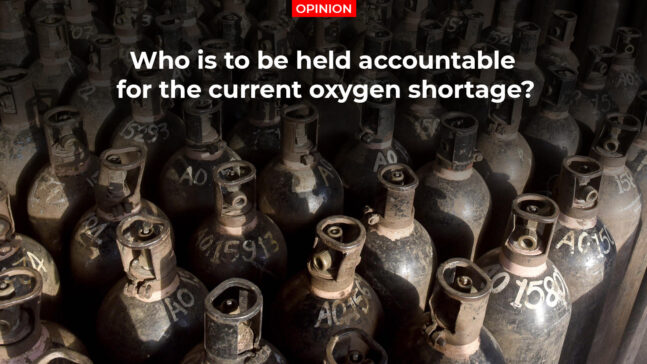 The second wave of the Covid-19 has left infected patients gasping for breath as hospitals in some states continue to face an acute shortage of medical oxygen.

Many hospitals in Delhi and few other states are currently operating on the edge due to a shortage of medical oxygen.

Over the past few weeks, many breathless Covid-19 patients have died due to the unavailability of medical oxygen in hospitals situated in Delhi, Uttar Pradesh, Maharastra, Gujarat and Madhya Pradesh.

Twitter and other social media platforms show the severity of the oxygen shortage in these states.

Meanwhile,  affected citizens have slammed the Centre and state governments for the shortage of medical oxygen.

Reports clearly states that we are self sufficient in terms of production of oxygen in our country.

How the problem of oxygen shortage emerged in India?

An instant rise in the cases in second wave of the virus leads to the shortage of oxygen.

The issue is that supply is available in places that are very far away from the demand.

Shortage of oxygen cylinders, transport trucks and other logistics.

The 24×7 availability of cryogenic tankers — necessary for transporting liquid oxygen — is difficult given the fact that many hospitals are facing a shortage at the same time.

The need of the hour is to manufacture more cryogenic tanks, which can take up to four months.

In such a scenario, the use of trains to supply oxygen to states are also likely to ease the shortage that some states are facing.

Steps taken by the government to reduce shortage of oxygen.

The government’s decision to import 50,000 metric tonnes of oxygen is also likely to help mitigate the demand crisis in the next few days as operations have already started.

The Centre has also sanctioned the installation of 162 Pressure Swing Adsorption (PSA) oxygen plants in public health facilities across states.

The plants will augment medical oxygen capacity by 154.19 metric tonnes, according to the health ministry.

Despite these efforts, a lot will depend on whether the country manages to reduce daily Covid-19 infections over the next few weeks.

If the chain of infections is not broken by the end of May, India could witness an alarming oxygen crisis.